Nothing disgusts the public’s regard for the political establishment more than the establishment’s assumption that laws apply to others but not to themselves. And nothing provides a better example of such contempt than a person who is (as yet) an unconvicted felon who believes she has a right to the presidency of the country.

If this country is to survive, justice and the rule of law cannot be ignored. That is especially so for the supposed role models who expect to lead. No one can be  “too big to prosecute” without destroying the confidence in the entire system.

Justice Brandeis, a supreme court justice, understood the delicate balance between government and its citizens:

In a government of laws, the existence of the government will be imperiled if it fails to observe the law scrupulously. Our government is the potent, the omnipotent teacher. For good or ill, it teaches the whole people by its example. If government becomes a lawbreaker it breeds contempt for law: it invites every man to become a law unto himself. It invites anarchy

This election has been characterized as a rebellion against the establishment. Perhaps it is better to view it in Brandeis’ terms: “If government becomes a lawbreaker it breeds contempt for the law …”

Bernie Sanders and Donald Trump, two of the more bizarre candidates of modern times, reflect the disgust against the status quo. Both are desperation choices. Both are wrecking balls whose primary attribute is that they are not the establishment. Hopes are likely misplaced in either. Both are high-risk candidates who seem to be preferable to many in lieu of a continuation of the status quo.

A revolution at the ballot box is preferable to one in the streets, although there are precious few examples of success resulting from ballot box revolutions.  Thomas Jefferson seemed to understand that an occasional real revolution was necessary to keep the scoundrels in line:

Every generation needs a new revolution.

Power is never relinquished by choice. It is only regained by greater power.

For someone who fears where we are headed, the candidacy of Hillary Clinton should be especially concerning. One does not need Justice Brandeis to understand the implications of the election of a felon to the highest office in the land. That very event could be the straw that obsoletes elections. 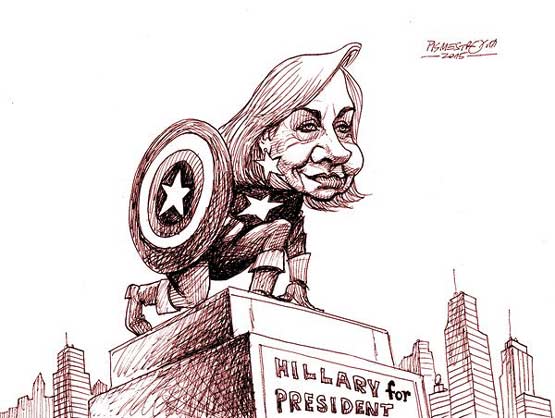 Surely, Hillary Clinton hopes for the happy conclusion to the maddening string of primaries and caucuses that have exhausted her. Surely, she hopes to be the presidential nominee of the Democratic Party this year. And surely, she hopes to be elected president. These hopes are realistic probabilities in her own mind.

But if she is hoping for the end to her legal woes, that is a false hope — and she knows it.

The relentless barrage of bad legal news for Clinton, which has been relegated to below-the-fold stories because of the primary news position of the presidential primary contests, must keep her and her lawyers up late at night. While her husband has been arguing with military veterans at her political rallies and while Marco Rubio and Donald Trump have been mocking each other’s body parts, a series of curious developments has occurred in the Clinton email scandal.

It is fair to call this a scandal because it consists of the public revelation of the private and probably criminal misdeeds of the nation’s chief diplomat during President Barack Obama’s first term in office. Clinton’s job as secretary of state was to keep secrets. Instead, she exposed them to friend and foe. The exposure of state secrets, either intentionally or negligently, constitutes the crime of espionage. For the secretary of state to have committed espionage is, quite simply, scandalous.

We are not addressing just a handful of emails. To date, the State Department has revealed the presence of more than 2,000 emails on her private server that contained state secrets — and four that were select access privilege, or SAP. The SAP emails require special codes in order to access them. The codes change continually, and very few people in the government have the codes. SAP is a sub-category of “top secret,” and it constitutes the highest level of protected secrecy, for the utmost protection of the government’s gravest secrets. It is unheard of for SAP-level data to reside in a non-secure, vulnerable venue — yet that is where Clinton caused four SAPs to reside.

Clinton’s allies in the State Department have perpetrated the myth that the 2,000 emails were recently upgraded to reflect their secret contents. That is untrue. The emails possess secret status by virtue of their contents, not because of any markings on them. Clinton had a legal obligation to recognize state secrets when she saw them, no matter their markings or non-markings. On her first day on the job, she swore under oath that she recognized and understood that legal obligation and she promised to comply with it. She did not comply.

Also this past weekend, Gen. Michael Hayden, formerly director of the CIA and of the National Security Agency, stated on CNN that it is a near certainty that the Russian government and others had access to Clinton’s non-secure server and all it contained.

Lawyers familiar with the terminology of state secrets will refrain from using the word “classified” to describe the emails that contained state secrets, even though Clinton repeatedly does that. The word “classified” is not a legal term; rather, it is derived from the verb “to classify,” and it means that the classification process has been completed.

Since nothing is marked “classified” — the legal markings are “confidential,” “secret” and “top secret” — Clinton has been materially misleading the public and the FBI when she claims that she never sent or received anything “marked classified.”

By saying that, she wants us to believe that in more than 2,000 instances, she failed to ascertain the presence of state secrets in emails she received or sent. No voter but the most hardened supporter, no federal prosecutor, no FBI agent and no juror will believe that.

He directed the Judicial Watch lawyers to ascertain whether there was a conspiracy in the secretary of state’s office to violate federal law. If those lawyers find evidence of such a conspiracy, they may then seek the oral examination of Clinton herself.

This search for a conspiracy will take Clinton down the road to perdition — to the end of her hopes. Along that road are instructions to a subordinate to divert all her government emails through her private server. On the side of that road are emails instructing her aides to remove “secret” markings from documents and resend the documents to her via a non-secure fax machine.

On that road are emails revealing the names of secret undercover intelligence assets, the locations of North Korean nuclear facilities, the transcripts of telephone conversations among foreign intelligence agents, and the travel plans of then-U.S. Ambassador to Libya Christopher Stevens in the days before he was murdered.

Democrats who indulge in Clinton’s false hopes will do so at their peril. Don’t they want to know of her potential status as a criminal defendant before they complete their nominating process? Or do they, like her, think that they can just hope that all this will go away?